Remote-controlled aircraft enjoy great popularity among teenagers and adults. They are sometimes very complex and more than just a toy. Smaller models are designed specifically for indoor flight, while most model aircraft are designed for outdoor use.

What is a remote-controlled aircraft

At remote-controlled aircraft it is about Model airplanes, which have real flight characteristics. The radio remote controls control the rudders of the model and the engines (except glider) in flight, which then initiate takeoff and climb, turn, descent and landing. There are very lifelike Replicas of real role modelswhich is not the case with all models. You will also find simple sports aircraft, which have one or more propellers (corresponding to so many engines). Very popular are the replicas of fighter jets, this with Propeller or impeller are equipped. Impellers are encased in a housing propeller, which also allow an internal installation in the model and especially for Jet models be used. Replicas of military and civil aviation are widely available at most manufacturers. Put a special kind remote-controlled gliders which is additionally provided with an auxiliary engine (motor sailer, Motor Glider).

Operation of a remote-controlled aircraft

A remote-controlled aircraft is a real aircraft, It usually requires a motor to reach the required speed. If the flow velocity at the wings is high enough, it starts to fly.

Like real airplanes, it needs steering to control it. Depending on the model, there are controllable rudder, ailerons and elevator:

About the remote control can appropriate Commands via radio That's why they're being sent to the model RC airplanes called. RC stands for Radio control and names the control or control via radio commands. A receiver receives the signals and then drives the servomotors, which execute the commands accordingly and adjust the rudders. at Motor models is controlled by the remote control and the engine speed. Stand as engines Electric and combustion engines to disposal. Due to continuous developments in electric motors and the associated battery technology, the electric motors have largely displaced the combustion engines in the professional model sport, where stronger performance is required.

In addition to the flight model itself, some components are part of a complete ready-to-fly model.

The radio remote control allows the user to send "commands" to the model. There are two joysticks available, which horizontal and vertical can be moved. This allows the control commands for the rudder and also the motor control to be dosed sensitively. Depending on the model and function, other control elements may also be present, for example a switch for a retractable landing gear. For each function basically one channel is needed. Therefore, the transmitters have multiple channels, with at least one 3 channel control is already recommended for motor models. Of course, controls with more channels allow a variety of functions or rowing to be controlled. This allows one remote-controlled aircraft it will be much more difficult for beginners to master the aircraft. A stall usually results in the crash of the model, as in the case of real aircraft, especially if this happens at a lower altitude.

Für den RC model sport Different frequency ranges are available. For some time, certain channels in the frequency bands 27 MHz, 35 MHz and 40 MHz have been approved in Germany. It is important to note that the 35 MHz range is only approved for model aircraft. This increases security because users of others RC models, for example remote-controlled cars or ships, the frequencies of the model aircraft can not disturb. Not so long ago is the 2,4 GHz range for RC models admitted. At the same time, the transmission and reception technology has improved in this area. Depending on the station, a free unoccupied channel is now searched automatically. Transmitter and receiver are also tuned to each other so that another remote control can no longer control the model.

Of course, a receiver must match the transmitter used in terms of frequency range and transmission channel. He needs a power supply, which is usually provided by the model battery. It receives the signals from the transmitter and controls the connected servos or controllers for motor control accordingly. At the same time, it supplies the connected servos or controllers with power.

For remotely piloted aircraft Electric and combustion engines are available. However, most "amateur pilots" prefer the electric motor. It will no gasoline mixture needed, the noise pollution is much lower and there are no exhaust fumes. Combustion engines are almost only used by professionals, which equip, for example, much larger and thus heavier models. The performance of modern electric motors (for example brushless motors) is sufficient for most users. Internal combustion engines also have the disadvantage that they require a preheating and must be fired. An electric motor works against it button insofar as the required current (charged battery) is available.

In almost all RC models must be performed movements. Be it to adjust the steering at a RC Car, adjusting the rudder at a RC Boat or the operation of the rudder at a remote-controlled aircraft, This task is carried out by small electric servomotors, the servos. They are available in different sizes and with different adjusting forces. An internal combustion engine also needs a servo to control the power via a throttle.

Electric motors are not controlled via the servo like the combustion engines. You need a regulator that controls the voltage of the electric motor. These regulators, also called speed controllers, are available for different voltages. at RC cars and some RC boats They also allow reversing, what a remote-controlled aircraft Of course, superfluous.

Batteries are energy storage, They are repeatedly rechargeable and provide the needed energy for RC models to disposal. Often they are also in the Radio remote controls, By interconnecting several cells, the desired voltage is achieved, for example 6 x 1,2 volt cells result in a battery pack with 7,2 V. The voltage is indicated in batteries in volts, the capacity

in mAh. For RC models For example, nickel-metal hydride (NiMH) batteries are often used which have low self-discharge, for example Kraftmax Racing Pack, In addition to the required connector must at remote-controlled aircraft be paid attention to the weight and of course on the dimensions of the battery. 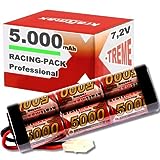 Batteries must be recharged after use. This requires a charger. Professionals use special chargers, which also allow the care, the measurement of capacity and sometimes even a regeneration of older batteries.

Remote-controlled aircraft are available individually or in sets in which (depending on the type of design) many or all required components are already included:

Practically, there are all types of aircraft as a model, which also exists in real. In addition, there are many models that are not based on any role models. Apart from the big models, which are built and controlled by experienced professionals, the smaller models are more interesting for beginners. Here are double decker, Motorplanes and Jets the favorites. Many of these remote-controlled aircraft are made of styrofoam (molded foam), which is an advantage especially for children. They significantly reduce the risk of injury and also do almost no damage in crashes:

FPV stands for "First person view" and will help with one camera carried out. In a passive system, the camera films the flight. The resulting video material can then be viewed later and shows the flight practically from the "First-person perspective"as if the user himself was sitting in the model. With an active FPV, the Video images in real time sent to a recipient. This allows the user to control the model based on the video images. For image analysis will be small monitors or Video glasses used. It is important to note that two transmitters work on the active FPV, the radio remote control and the video image transmission. To avoid mutual interference different frequency ranges should be chosen, for example 2,4 and 5,8 GHz.

A remote-controlled aircraft must be checked very thoroughly before its first use. Failures or malfunctions can cause the model to crash in the air. A suitable place for the flight must be present. For foreign land requires the express permission of the owner! Regional regulations regarding RC airplanes is notable. There may be no-fly zones near motorways or airfields. Batteries in the model, the remote control and possibly for the receiver should be fully charged. The propeller must be checked for tightness. The used radio frequency should be trouble-free. The battery should be firmly installed and not slip in an uncontrolled maneuver. People and animals should be kept away from the flying model. Especially birds can cross the trajectory surprisingly. But even dogs can take off or land Model planes come dangerously close. Flights over water surfaces increase the risk of loss in the event of a crash. The functions of the aircraft (rudder deflections and engine control) should be tested in still standing model.

The advantages of remote-controlled aircraft

The focus is on all models of enormous fun. It makes fathers a great joy when they have one with their offspring flyer start, fly and land. Thus, one is remote-controlled aircraft for young and old a very popular hobby. In the process, the young generation will be able to convey an understanding of technology from childhood on, which is associated with a great learning factor. Similarly, it is conducive to fine motor skills, a remote-controlled aircraft to learn to serve. In this hobby, it's easy to make friends with like-minded people, because this enthusiasm for the different aviators connects.

For younger children, smaller foam models are suitable because they are overwhelmed with complicated controls. Models with internal combustion engines are not suitable. Supervise your child during the flying exercises!

The selection of different models is large and makes the choice often a pain for the buyer. Therefore, it is very important to consider certain criteria before purchasing:

As an inexperienced pilot from a remote-controlled aircraft, you better access a beginner's model. These do not fly so fast and are also smaller in size.

Buy on the Internet or at the retailer?

After all the information, you are sure to ask yourself where you are remote-controlled aircraft in high quality and to one fair price could buy. We present you two possibilities, decide for yourself! Distinguish between buying on the Internet or the model shops.

Buying on the Internet

Thanks to the many online retailers, there is an enormous choice available on the internet. The large assortment on the internet makes buying your desired model easy. You can shop in the shops to your heart's content around the clock Browse this 7 days a week, Advantage is also, travel costs and travel times to the dealer omitted. They also stand interesting sets available, which can be very attractive price. In general, one or the other bargains can be discovered at the online retailer. Here you will surely find your desired remote-controlled aircraft in front. You do not have to do without fast delivery times and the right of withdrawal. Unfortunately, you can not immediately take your desired model as with the local dealer.

The purchase in the specialty shop

Clear advantage when buying a remote-controlled aircraft In the model shop you can immediately take the model home with you. Ideally, you will also find competent employees for a personal consultation. Unfortunately, these shops have become rare, also often leaves the selection much to be desired. You often need luck, if you want to find their desired model in the assortment. Connected with the purchase in the shop partially long journeys. Waiting for a consultation has already frustrated some buyers. In contrast to the online retailer, true bargain prices are rare. Returns can cause problems.

No votes yet.
Please wait...